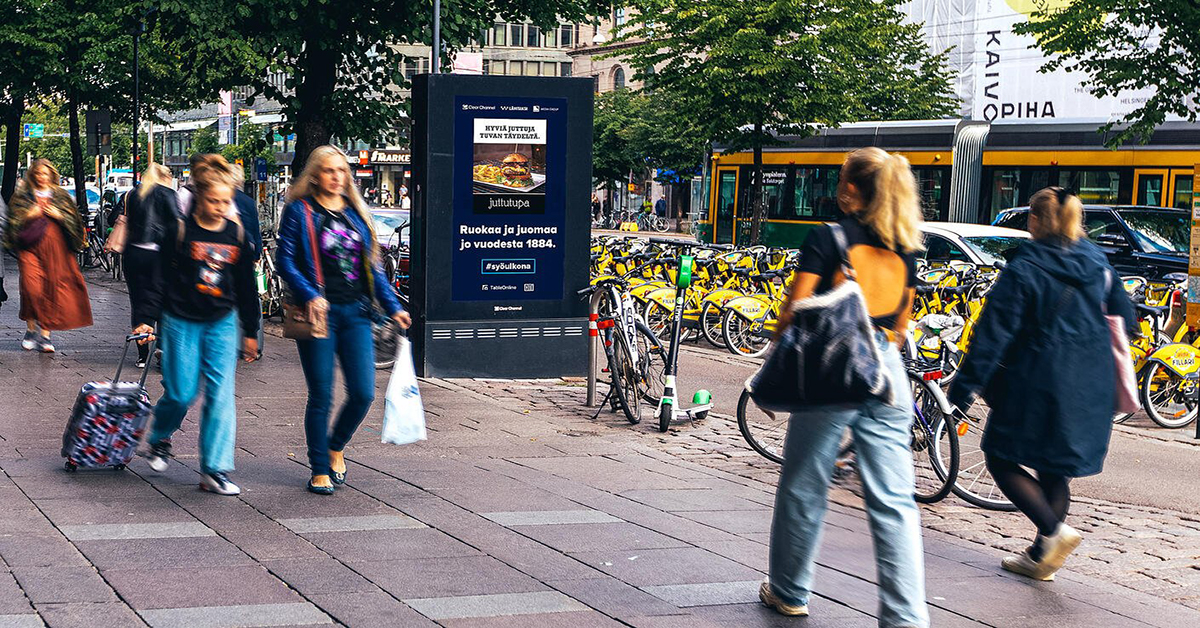 We want to be more than just a out of home media owner. Our mission, “A Platform For Good,” refers to both small and large actions we take to nurture well-being in partnership with cities, advertisers, and our other stakeholders. We believe we have a responsibility to serve our communities and make a positive contribution to society. We continually invest in infrastructure and projects to find new and impactful ways to continue to make Out of Home a Platform for Good. Clear Channel’s #syöulkona campaign was created to support restaurants in Finland during the current coronavirus pandemic, which has significantly affected the restaurant industry. We wanted to help the restaurants get back to business by giving free visibility in the cityscape.

Because of the pandemic restaurants have lost their money a long time ago from the cash and don't have money to do marketing. You should still be able to advertise, and #syöulkona is therefore a really important campaign that any restaurant can get involved with. Customers long for restaurants and restaurants long for customers and we need to encourage people to return to restaurants when they feel safe to come. "

MULTI-CHANNEL MARKETING WAS a great success

The campaign itself was featured in the busiest areas of the metropolitan area on Downtown Digital street screens, on the Amos Rex Art Museum’s stunning media wall, The Rex, and on large digital Panorama billboards placed along the busiest highways.

DYNAMIC OUTDOOR ADVERTISING DOES NOT HAVE TO BE hard

The aim was to make participating in the campaign as easy as possible. All the restaurant had to do was upload the ad image to the website and decide on the copy text they wanted. The ad image and text were automatically embedded in the finished campaign visual and the ad was able to preview before posting.

We used the online feedback survey to find out the restaurants' thoughts on the implementation of the campaign, and all respondents found it easy.

''Yes, all you had to do was send the suitable material.''
"Extremely easy."
''Yes it was, I was extremely happy to have the opportunity to participate with just a cell phone picture.''

A total of 228 advertisements changed 'spontaneously' in advertising spaces in Helsinki, Espoo and Vantaa during the campaign. Making out of home advertising has never been this easy!

The campaign reached the people of Helsinki metropolitan area excellently. It sparked a lot of discussion on social media, for which a big thank you goes to Henri Alén, who acted as the voice of the campaign. The campaign was also mentioned in media, such as Kauppalehti and MarkkinointiUutiset.

AND WHAT RESTAURANTS THOUGHT ABOUT THE #syöulkona-CAMPAIGN

"The most amazing thing the restaurant industry has encountered in the last year."

"The #syöulkona-campaign gave Siipiweikot restaurant the opportunity to be seen in key locations in Helsinki at a time when restaurants need all possible visibility and support."